This week the Cult Film Club discusses the 1982 movie Zapped! While this movie is mostly a parody of other popular movies at the time (Carrie, Porky’s, Exorcist) it is also what I like to call a “geek transformation” movie. In the movie, the lead character, who could be described as a “geek” or “nerd”, is transformed, through some means either physical or supernatural, into something more.  Something, ostensibly, better.

Many movies have used this plot device, especially in the 80s and 90s, and there are many different types of geek transformations.  I thought I’d take a look at a few of them and include an example of a “cult movie” to demonstrate. Modern Problems (1981) – I’ll start this off with a movie that uses a similar geek transformation to Zapped!  in which the main guy accidentally gets super powers.  Here mild mannered, milquetoast Chevy Chase loses his girlfriend and is in danger of losing his job as an air traffic controller.  One late night while driving home from work he is covered in toxic waste while riding behind a truck with a faulty latch on the back.  Chase soon discovers he has telekinetic powers and begins to use them to get his girlfriend back and do better in his job.  The actual nature of the powers are a bit nebulous.  It’s probably more correct to say that he can “will” things to happen instead of calling him a “telekinetic”.  Whatever he wants to happen, happens when he concentrates.  The power mostly manifests itself through telekinesis but there are other instances that can’t be defined as specifically telekinetic.  I enjoy this movie, it’s really funny.  If you enjoy Vacation, Fletch or Spies Like Us-era Chevy Chase you’ll enjoy this.  However, the movie is a tad quirky with random scenes of weird humor. No Retreat, No Surrender (1986) – I loved martial arts movies in the ’80s. They were so ridiculously stupid. The premise of most of these movies involved kids who are picked on in school somehow finding a karate master (usually Asian) working as a janitor or a dishwasher (or something similarly low status) who can teach them to be the best fighter in the area in a few months (possibly even weeks). This was one of those beauties, except this time the kid that is picked on gets taught by the ghost of Bruce Lee who, other than being Asian, doesn’t look anything like Bruce Lee. I saw this one in the theater and fell in love with the absolute awfulness of this movie. The lead kid makes crazy, over-the-top martial arts faces and gestures when he fights and his best friend, R.J., is a break dancing, rapping, hip machine that talks and acts so white he reminds me of Carlton Banks in The Fresh Prince of Bel-Air. The villain is Jean-Claude Van Damme in his first major screen role. Van Damme is mostly strong and silent in the movie with only a few lines and some fights at the very end.  The script is so absolutely stupid and the movie looks like it was filmed with a camcorder. To my, and many fans’, dismay, there has been no DVD release yet. Surprisingly, two sequels were made to this movie, but Jean-Claude pulled out right before shooting the sequels because he felt it wouldn’t further his career. Good choice.  If you remember, I actually did a recast of this movie in Part 2 of the second episode of Cult Film Club.

The “Geek-to-martial-arts-master” plot device was used prolifically throughout the 80s and 90s.  Most famously with The Karate Kid and the lesser known Sidekicks with Jonathan Brandis and Chuck Norris.  You can also see it in such high brow fare as the mostly obscure 1993 movie Showdown starring Billy Blanks and the nearly unknown 2008 “Karate Kid remake that isn’t a Karate Kid remake”, Never Back Down. 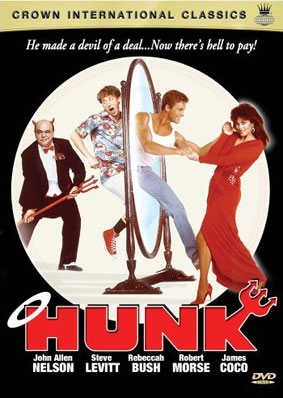 Hunk (1987) – I remember watching this ’80s time capsule on Cinemax back when I was a kid (I was 13 when it was released). I guess my burgeoning hormones as a new teenager won me over to this classic “Geek-to-hunk” movie. The premise involves a dorky computer programmer (obviously I identify with the lead) renting a cabin at the beach for the summer. He is approached by an attractive female minion of the devil (who looks an awful lot like Dom Deluise, but isn’t) with a proposition to make him a “hunk”. He accepts and he’s turned into a gorgeous, blonde, ripped, karate master bad ass. And hilarity ensues. This actually had a DVD release recently and I got it off Netflix to relive its awesomeness. And it was awesome. The best thing about this movie is seeing all the awful ’80s fashions on display. It’s a veritable cornucopia of bad clothing choices. And when the main hunk guy wears a blazer with the sleeves ripped off, a tie and no shirt, you know you’ve reached quintessential 80s liftoff. Just a footnote, since I remembered watching this on Cinemax, I thought there was more nudity and/or adult situations, but, alas, it’s pretty tame.  I should have known better since the MPAA rating is only PG. 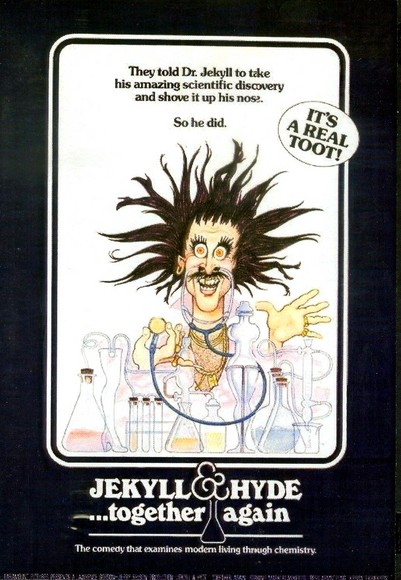 Jekyll & Hyde…Together Again (1982) – Now this is one of your classic late night “Skin-emax” movies. It’s funny, has boobies and major drug use. It’s a true adult comedy (with a deserved MPAA rating of R). I don’t remember when I first watched it but I think my dad and I rented it when I was a teenager. As a matter of fact, I bought the VHS copy of the movie we rented when the rental store went out of business.  The premise has brilliant but absent-minded scientist, Dr Jekyll, accidentally invent a powder that releases the base urges of all human beings. After he mistakenly snorts the powder, he turns into a sex and drug crazed maniac (named Hyde, of course) only out to satisfy his base desires. He then gets caught in a love triangle with Jekyll’s fiance and Hyde’s prostitute girlfriend. Zany situations and funny dialogue make this a crazy movie. There are a few good songs in it too. If you go into it expecting something along the lines of Porky’s, then your expectations will be in the right place. Cause remember…Hyde’s got nothing to hide!! This movie very recently snuck onto Blu-Ray in a double feature with Student Bodies.

And those are some of the “geek transformation” movies I personally have identified and enjoy.  There are many more out there.  What are some of your favorites?

From the Archives…Starlog on YSH